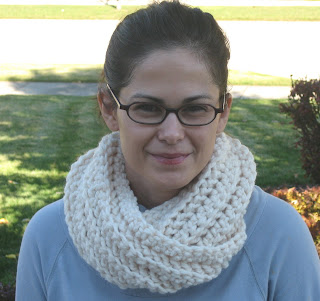 Do you ever buy yarn not knowing exactly what you are going to make it into? I bought some extra bulky off-white yarn a couple of years ago. I tried making it into a drop stitch scarf, but I'm not much of a knitter and it didn't look right. So I tried to make it into a hat, but again it didn't look right. It had been so long that I lost the wrapper to the yarn and didn't even know what kind of yarn it was or what to do with it.

And then I found this free pattern. It was the perfect use for my yarn! It works up quickly and you only need to know two stitches - two stitches I had never used before so I learned something new in the process :) I've made two so far to give as Christmas presents and I'm working on a third. The third one I'm making using some grey yarn I've had sitting around for a while, but it's not bulky weight so I'm holding two strands of yarn together as I work.

I followed one of the suggestions given in the comments to the pattern. After I made the cowl, I gave it a twist before sewing the ends together. I love it!
Posted by Anna at 9:00 AM

I love your cowl - it looks great! I'm glad you found the pattern and are putting it to good use. I make these as gifts for my friends, too. They're quick to work up and everyone loves them. Keep those hooks moving! - Jayna

Well done! Nice cowl.
Thanks for the pattern.