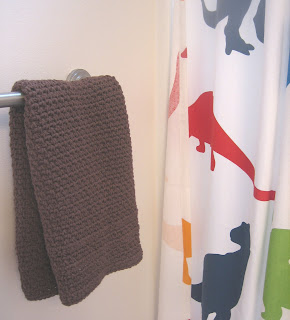 I am in the process of redecorating my sons' bathroom so that it is a little more grown up. I found this fantanstic shower curtain at Target. It doesn't come with coordinating towels or bathmats so I decided to make mine own.

Because of all the bright colors in the shower curtain I chose neutral accessories. I had some brown cotton yarn left over from another project and decided to make a hand towel using this super easy pattern (it's the one for the striped cotton dishtowel but I made mine all one color so it doesn't have a stripe). I was worried that a crocheted towel would be too bulky, but this one isn't. I don't know if I did something wrong, but my towel was already 24" long by the time I got to Row 88, so I went back and ripped out 11 rows (i.e., I only made Rows 13-77) then followed the rest of the pattern from Row 89 on. I also didn't do Round 2 of the edging.

Thanks for the great pattern! Can't wait to see the bath mat!

Very nice. Cotton is always so useful at home.

It looks really great, but I can't find the pattern, could you tell me where it is? thanks (:

It is the third pattern listed on the page for the striped cotton towel (in the photo it's off-white with a brown stripe). I hope that helps :)

Thanks :D that helped alot.. I really look forward to making one